12 Food Waste Facts You Should Know 

Food waste is one of the most pressing current human rights and environmental crises. One in ten people in the world suffers from hunger, according to Action Against Hunger. Meanwhile, one-third of all the food produced for human consumption globally is wasted, as cited by WFP.

We currently produce enough food to securely feed every person on Earth, so where is all this food going? Here are the important food waste facts you need to know to understand the problem.

Food waste is a leading cause of world hunger. According to the World Food Programme, one-third of food produced globally for humans is lost or wasted. This adds up to about 1.3 billion tons of food per year, which is enough to feed two billion extra people. Yet, 811 million people are still going hungry.

The UN has made cutting food waste in half one of the world’s top sustainability goals by 2030. Food waste can be prevented in every stage of the process by implementing new technologies, better understanding consumers, and educating the public on reducing food waste.

NRDC reports that households make up a large percentage of wasted food, much of which is still edible. Helping you reduce food waste at home is one of the benefits of meal kit delivery services. With pre-portioned meals delivered straight to your door, you can help do your part to eliminate food waste.

According to a 2017 report by the NRDC, restaurants and food service providers account for more food waste than grocery stores, retail, and distributors. Restaurants are responsible for 22-33 billion pounds of wasted food each year.

In the US, portion sizes have increased dramatically over the past few decades. The same report by the NRDC found that restaurant portion sizes are now regularly two to eight times larger than recommended serving sizes. All this extra food often becomes waste. People leave about 55 percent of their leftovers on the table and many leftovers that are taken home end up in the trash anyway. Other practices like “all you can eat buffets” also contribute to restaurant food waste.

The agriculture industry is responsible for nearly 20 percent of all global greenhouse gas emissions, according to Our World In Data. The meat and dairy industries are especially wasteful, contributing over half of all carbon dioxide produced per year as reported by Cowspiracy. When food is wasted, all the energy and resources put into it are also wasted.

2. Food Waste Accounts For More CO2 Emissions Than Most Countries

Food waste accounts for more global carbon dioxide emissions than nearly every country in the world except for the US and China. Up to 8 percent of human greenhouse gas emissions could be eliminated by ending food waste, according to World Wildlife.

3. Half of the Water Used to Produce Food Is Wasted

Agriculture is the biggest contributor to human water use. The UN Environment Programme estimates that half of all water used to produce food is going to waste.

1. Food Waste In Landfills Has Tripled Since the 60s

The EPA estimates that the amount of food waste ending up in landfills has tripled in the past 50 years. This adds up to over 60 million tons of wasted food per year, according to Stanford University.

2. Food Does Not Biodegrade In Landfills

About a quarter of waste in landfills comes from food, according to the EPA. Contrary to popular belief, food does not “break down” as expected in a landfill. The lack of oxygen circulating through landfills prevents the food from completely biodegrading. Instead, the food continues to sit there releasing methane. Methane is a greenhouse gas that is 80 times more powerful than carbon dioxide over a 100-year period. Landfills currently account for 15 percent of all greenhouse gas emissions in the US.

Reducing food waste is possible and necessary. As consumers, we can do our part by reducing our own waste. The EPA has developed a Food Recovery Hierarchy that outlines the ideal ways to recycle food that would be otherwise wasted.

The best use of food that would otherwise be wasted is to feed humans. On a large scale, this includes recovering food lost during production and implementing industrial food reprocessing plans to make use of large amounts of food waste from industry.

On a personal level, you can help feed people with your food waste in a few ways. For example, you can freeze food before it goes bad to increase its lifespan or donate unused food to local programs for people in need. Use this local food map finder to find a food bank near you! (Be sure to check first what food donations they accept to avoid your food being wasted!)

If there’s not an efficient way to get food scraps to humans, using them to feed animals is a good alternative. For example, Rutgers University reduces dining hall food waste by partnering with a local farm. The farm collects food scraps that would otherwise be wasted to feed pigs and cows.

You can implement this food waste reduction tactic at home, too. For example, many animal sanctuaries accept donations of pumpkins after Halloween!

Although food waste won’t break down in a landfill, you can help properly dispose of food waste at home by composting it. Americans have been able to keep almost 25 million tons of waste per year out of landfills by composting.

Composing can be done at home, but you will need to do your research on what items can be composted and how to maintain a healthy compost bin. There are many methods of composting available, including even home compost pick-up services. Compost can be used to fertilize plants and crops.

You Can Help Reduce Food Waste

Even if you follow all of the steps above to recycle your food scraps, the best way to reduce food waste is to not buy extra food in the first place! To avoid wasting food, shop with a weekly meal plan in mind. This way, you know when and how you plan to use every ingredient. Make regular use of your freezer, and learn how to properly keep different types of produce to extend their life.

Gobble makes it easy to reduce your food waste by doing all the meal prep for you! Gobble delivers pre-portioned meals right to your front door. This way, you don’t have to worry about meal planning, shopping, and avoiding food waste.

The Gobble Classic Plan includes a diverse range of chef-crafted meals to choose from every week. The Lean & Clean plan offers an alternative focused on healthy proteins, suitable for any diet — including vegan, vegetarian, and gluten-free! Healthy Rice Alternatives That Are Easy to Swap In Any Meal How to Thicken A Soup: 3 Options For Home Cooks Understanding the Different Types of Spicy 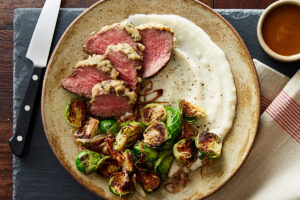 Love is in the air! ‘Tis the season for red roses, chocolates, and of course, a celebratory dinner. Whether you’re spending the evening with your significant other, galentines and roomies, all the kids, or even solo, we’re here to make your Valentine’s day extra special this year. Our chefs have created an amazing menu so that you can bring the restaurant experience to your home. We have delicious stand-alone entrees, plus all the perfect options for a delightful 3-course meal! A Time for Family, Friends, and Amazing Meals

The adversity that we’re facing hides a rare gift — time with our loved ones. While communities practice social distancing, we encourage you to sit down for dinner each night with family and friends, whether face-to-face or virtually. Because nothing connects us quite like a delicious, home-cooked meal.

Healthy Rice Alternatives That Are Easy to Swap In Any Meal

Rice is found in cuisines all over the world. It is a delicious grain that pairs well with just about any dish- sweet or savory.

How to Thicken A Soup: 3 Options For Home Cooks

Have you ever been cooking a soup, only to feel like it is too thin? Many thick, hearty, or creamy soups are best enjoyed when

Understanding the Different Types of Spicy

Do you like spicy food?  Spicy food is found in cuisines all over the world. However, all spicy foods are not created equally. There are