6 Different Types of Grains to Eat

Grains are the edible seeds of plants in the cereal family. There are many types of grains, but the most common ones are wheat, barley, oats, quinoa, rye, and rice. Grains are a good source of fiber, vitamins, and minerals and the largest source of food and nutrition in the world. If incorporated properly, they can be an essential and easy-to-cook part of a healthy diet.

There are many health benefits of grains. Grains are a good source of fiber, which can help regulate digestion and bowel movements. Grains are also a good source of vitamins and minerals, including thiamin, niacin, vitamin B6, folate, iron, magnesium, and zinc. Some research suggests that grains may also have health benefits, including reducing the risk of heart disease, stroke, and diabetes.

Many types of grain to eat are also a low-glycemic food, meaning they don’t cause a spike in blood sugar levels. This is beneficial for people with diabetes or prediabetes, and for anyone looking to maintain a healthy weight. Read on to learn more about the different types of grains and how you can use them to make healthy food swaps.

Common Types of Grains to Eat

Wheat is a cereal grain that is grown all over the world. Together with rice, it is a major source of food for humans and animals.

Wheat is a good source of fiber, selenium, manganese, phosphorus, copper, and folate. Wheat is also a low-glycemic food, meaning it doesn’t cause a spike in blood sugar levels.

Along with wheat, rice is the world’s staple crop. This grain is raised in rice paddies, primarily in Asia, and provides sustenance to over half the world’s population.

Brown, unrefined rice is a type of grain that is high in fiber, lignans, ferulic acid, manganese, niacin, thiamin, selenium, and magnesium. White rice loses many of these benefits when it is processed.

The taste of rice is unique and varies depending on the type of rice. It can be slightly sweet, earthy, or nutty. Generally, brown rice and other, unenriched rice have a nuttier, earthier flavor, while unenriched rice is sweet, bland, and sticky.

Rice is most commonly eaten as a side dish or in rice pudding, but it can also be used in baking or cooking. Rice pairs well with most proteins, including chicken, beef, fish, and tofu. Gobble’s Classic Plan incorporates rice into many of its recipes, so you can enjoy a tasty, home-cooked meal fast!

Although not as popular as it used to be, barley is still an excellent choice for anyone looking for a versatile grain.

Barley is a type of grain that is high in fiber and antioxidants. It is a great source of thiamine, riboflavin, niacin, vitamin B6, iron, and magnesium.

The taste of barley is nutty, earthy, and slightly sweet. It has a chewy texture and is most often consumed together with its chewy husk.

Barley is most commonly eaten as a cereal, but it can also be used in baking or cooking. Many people enjoy incorporating it into salads, soups, and side dishes. Barley is also used in brewing beer.

If you are looking for a tasty and healthy meal kit, consider Gobble’s Lean & Clean Plan. We incorporate whole grains into our meals to power you throughout your busy day.

Oats are a cereal grain that is typically grown in cooler climates. The oats are planted in the spring and harvested in the fall.

Oats are a type of grain that is high in fiber, antioxidants, and protein. Oats are also a good source of manganese, phosphorus, copper, and iron.

Oats alone are known for having a bland taste and flaky texture. When combined with other ingredients, or used for baking, they can be an earthy and tasty treat!

Oats are most commonly eaten as a cereal, but they can also be used in baking or cooking, such as in oatmeal cookies.

Native to the Andes Mountains in South America, this grain has recently become popular all over the world due to its health benefits and unique flavor.

Quinoa is a type of grain that is high in fiber, antioxidants, and protein. It is also a good source of iron, copper, thiamin, and vitamin B6.

Quinoa has a special taste. It has a chewy and fluffy texture that reflects its high protein content. It is important, however, to cook it correctly to prevent a bitter taste.

Quinoa is most commonly eaten as a side dish or salad, but it can also be used in baking or cooking.

Rye is a grass that is used extensively in specialty bread, whisky, and some vodkas.

Rye is a type of grain that is high in fiber, as well as thiamin, niacin, Vitamin B6, riboflavin, and folate.

Rye is commonly associated with bitter Caraway seeds added by many bakeries, but it actually has an earthy and spicy flavor.

Rye is most commonly eaten as bread, but it can also be used in baking or cooking. It is a popular bread for sandwiches. It also forms the basis of many spirits, such as whisky and a few vodkas.

Learn To Cook With All Of The Grain Varieties

All of these grain varieties are excellent choices for cooking healthy, nutritious meals. If you are looking to incorporate healthy grains in your diet, consider Gobble. Gobble prepares fresh, specially chosen ingredients for you in meal kits that take 15 minutes or less to prepare. Learn how it works and gets the healthy grains you need!

Are Meal Delivery Services Worth It? 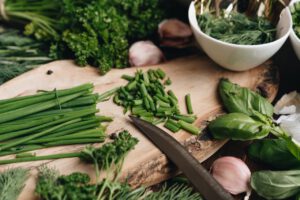 How to Store Fresh Herbs So They Last Longer

Are Meal Delivery Services Worth It?

Meal delivery services are a convenient way to have fresh healthy meals at home without all the hassle of shopping and cooking. With a service

How to Store Fresh Herbs So They Last Longer

There’s no better way to brighten up a meal than with fresh herbs. But unless you have the time to run to the store every

As a growing number of people are choosing to ditch dairy, there has never been a larger market for dairy-free swaps. Going dairy-free doesn’t have